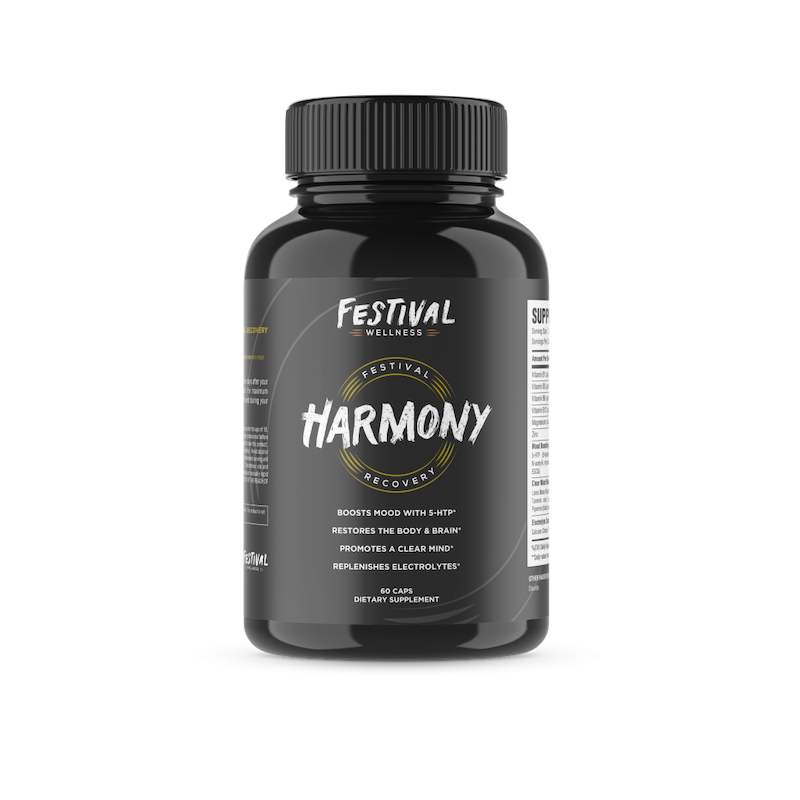 Balance neurotransmitters & hormones, remove damaging free radicals, and bounce back from a long night with our premium recovery formula!

HARMONY is our custom vitamin, herbal, and mineral supplement formulated specifically to maximize recovery when the parties over. This supplement is made to help replenish & restore the body and brain for maximum recovery after parties, festivals, and late nights. The premium formula helps promote a good mood and clear mind, so one can jump right back into their daily routine after an incredible festival weekend. Also great as a daily mood & clear mind support supplement!

The science is clear: due to the science behind 5-HTP, best results come from distinct pre- & post- formulas. Harmony is our custom post-event recovery blend; our Tempo formula frontloads your body with neuroprotectants, immune boosters, & electrolytes.

Directions: Take one serving daily for 3-5 days after your event or festival. Also works great at a daily supplement for mood & mind support. Do not take on an empty stomach. 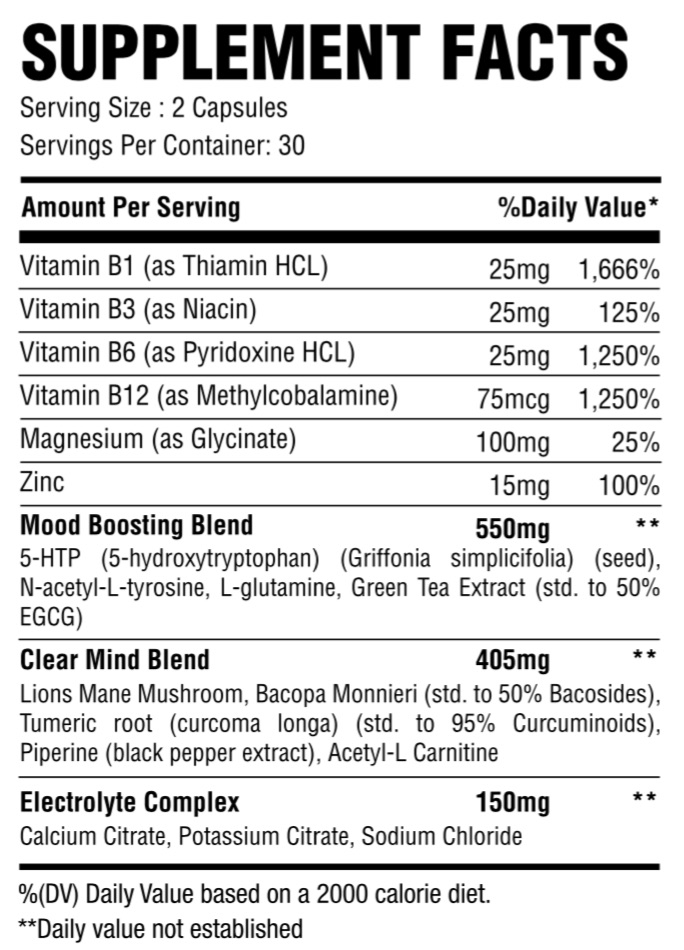 Over 20 vitamins, herbs, & minerals to replenish & rebalance from the highs & lows of multi-day festivals & daily stress.

B vitamins play a vital role in various essential bodily functions. Together, these vitamins help convert food into energy, metabolize fats and proteins, aid in production of neurotransmitters which affect mood and sleep, and maintain healthy skin, liver, and nervous system. In other words, without B vitamins we would be missing key ingredients in several pr    ocesses which keep us healthy.

5-HTP + B6, Magnesium, & Zinc: 5-HTP is an amino acid which acts as the precursor to serotonin. Tryptophan which we normally get from food gets converted into 5-HTP, which then converts into serotonin and any excess serotonin will be converted into melatonin. B6, Magnesium, and Zinc are all very important cofactors required for the conversion of 5-HTP to serotonin so its essential that you take these together. Supplementing with 5-HTP can signal the brain to keep producing serotonin after a festival weekend when your serotonin has been depleted, or receptors have down regulated after all the serotonin which they released. Since any excess serotonin gets converted to melatonin, 5-HTP can also be used as a natural way to regulate your sleep cycle. It won’t make you sleepy unless you take it at night since the release of melatonin is governed by your circadian rhythm, but it can help promote the natural creation of melatonin when its time to sleep.

N-acetyl-L-tyrosine: N-Acetyl-L-Tyrosine is the most bioavailable form of L-Tyrosine, which is an amino acid that can improve mood and memory, enhance cognitive abilities, and reduce the adverse effects of stress. It promotes healthy brain chemistry and mental clarity by providing the material from which dopamine, epinephrine, and norepinephrine are produced. These three neurotransmitters have a profound effect on energy levels, mood, motivation, and cognitive function.

Green Tea Extract: According to a study published by the Journal of Herbal Pharmacotherapy in 2006, green tea may protect brain cells and improve cognitive function. Its been reported that theanine, an important amino acid found only in green tea, increases neurotransmitters such as serotonin, dopamine and GABA while inhibiting glutamate, which causes oxidation and nerve damage when high. Theanine helps promote a good mood, learning, and memory.

L-Glutamine: The amino acid glutamine is involved in many metabolic processes. It stabilizes the immune system, strengthens the intestinal cells and helps  fight against stress, depression and anxiety. Glutamic acid, which is derived from glutamine, is essential for optimum brain function. During events like festivals, your body uses up mass amounts of glutamine that can easily be replaced with L-glutamine supplementation. Glutamine is most popular for its use as a workout supplement, and that’s because it aids in muscle recovery when taken before or after a workout. So not only does it help your brain recover after a festival, but your muscles as well!

There’s no worse feeling than coming back from a festival and having to go straight into a work or school week. We at Festival Wellness have struggled with extreme brain fog for days after a festival and found it hard to muster the ability to even think straight. When you live a professional life outside of the glorious festival scene, getting back into your normal routine post-fest can be difficult. That’s why in our Harmony product we created our ‘Clear Mind Blend’ with ingredients that work synergistically to enhance brain function, reduce inflammation, protect the brain, and improve mental health and well being. Brain fog no more! This is a key blend for finding harmony with your daily rhythms after a festival is over.

Lions Mane Mushroom: Lion’s Mane is an edible mushroom which has been used for thousands of years in traditional Chinese and Japanese medicine. The benefits of lions mane mushroom are substantial, but its mainly recognized for improving brain function. Lion’s Mane has been clinically demonstrated to enhance cognition including improved memory, and maintaining focus and attention. Additionally, Lions Mane helps in decreasing inflammation, combatting depression, and strengthening the immune system.

Bacopa Monnieri: A traditional adaptogenic Ayurvedic herb that is used to enhance clarity of thought and augment overall brain function. Bacopa has been shown to have neuroprotective effects and clinical trials indicated that bacopa also has the ability to significantly reduce anxiety and depression.

Turmeric Root + Black Pepper Extract:  Curcumin is the main active ingredient in turmeric root and along with being a strong antioxidant, it has powerful anti-inflammatory effects. Additionally, curcumin has been inked to improved brain function and a lower risk of diseases such as depression and Alzheimer’s. Black pepper is combined with turmeric root to increase its absorption in the body.

Acetyl-L-Carnitine: L-carnitine acts as a preventative to brain damage and deterioration due to stress. L-carnitine also hinders distress that can occur to nerve cells when there is a lack of oxygen to the brain. This naturally occurring amino acid can act as an antioxidant that provides the brain with healing energy. By providing your brain cells with needed energy, they have the ability to develop to their maximum capacity.  Dead brain cells are nearly impossible to replace so it’s important to maintain their strength and vitality. Overall, L-carnitine has four remarkable benefits for your brain and entire nervous system, including; keeping neurons healthy and energetic, repairing and protecting membrane signal receptors, protecting neurons from the damage of stress, and helping to promote memory function.

Electrolytes are what your cells use to maintain voltages across their cell membranes, and carry electrical impulses across to other cells. Hence, electrolytes are extremely important in regulating nerve and muscle function, body’s hydration, blood pH, blood pressure, and the rebuilding of damaged tissues.  Electrolyte imbalance can occur from many things. For example, when a person dances all day at a festival they lose electrolytes in their sweat, particularly potassium and sodium. Also, when a person drinks alcohol they become dehydrated and lose a lot of essential electrolytes through their urine.  An imbalanced level of vital electrolytes can lead to headaches, weak muscles, muscle contractions, cramps, or even severe cardiac conditions and heart palpitations.  The electrolyte complex in our formula helps replenish lost electrolytes to maintain healthy, stable electrical impulses within the body.