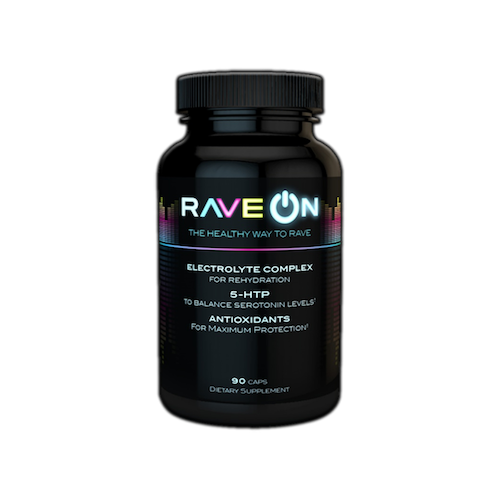 Rave ON is our original formula created to help replenish the body after a long night at clubs, raves, and festivals. The premium combination of ingredients in Rave ON work to maximize protection and recovery in your body while strengthening your immune system.

The science is clear: due to the science behind 5-HTP, best results come from distinct pre- & post- formulas. Rave On is our original recovery blend; our Tempo formula frontloads your body with neuroprotectants, immune boosters, & electrolytes for maximum protection.

Take one serving daily for three to five days after your rave, event, or festival. Do not take on an empty stomach. Intended for recovery only. It is not recommended to use 5-HTP prior to raving. For maximum protection before and during your rave or festival use Tempo: Festival Prep (no 5-HTP) 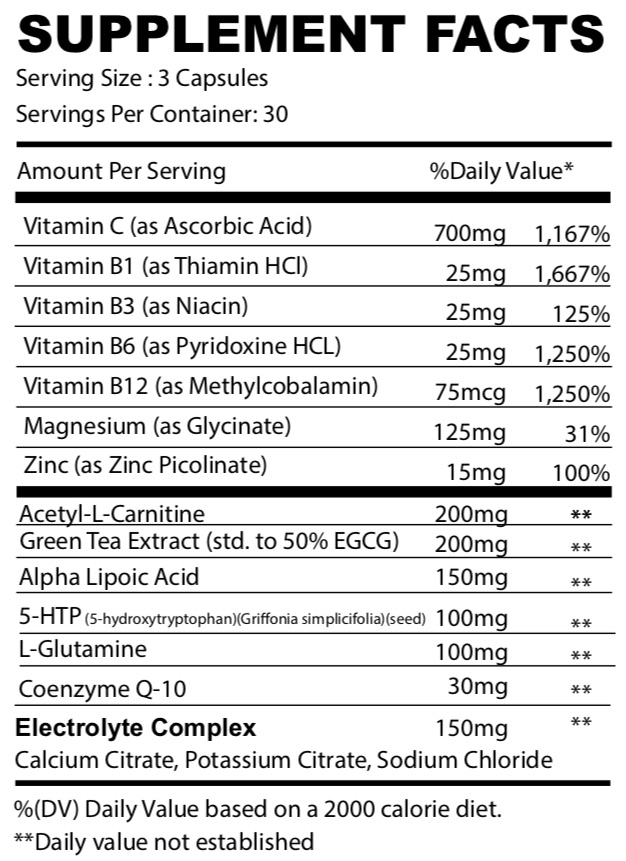 The original foundation for Tempo and Harmony, made up of herbs, amino acids, and minerals to help you recover after a wild weekend.

B vitamins play a vital role in various essential bodily functions. Together, these vitamins help convert food into energy, metabolize fats and proteins, aid in production of neurotransmitters which affect mood and sleep, and maintain healthy skin, liver, and nervous system. In other words, without B vitamins we would be missing key ingredients in several processes which keep us healthy.

5-HTP + B6, Magnesium: 5-HTP is an amino acid which acts as the precursor to serotonin. Tryptophan which we normally get from food gets converted into 5-HTP, which then converts into serotonin and any excess serotonin will be converted into melatonin. B6 and Magnesium are very important cofactors required for the conversion of 5-HTP to serotonin so its essential that you take these together. Supplementing with 5-HTP can signal the brain to keep producing serotonin after a festival weekend when your serotonin has been depleted, or receptors have down regulated after all the serotonin which they released. Since any excess serotonin gets converted to melatonin, 5-HTP can also be used as a natural way to regulate your sleep cycle. It won’t make you sleepy unless you take it at night since the release of melatonin is governed by your circadian rhythm, but it can help promote the natural creation of melatonin when its time to sleep.

Vitamin B6:  B6 aids in supporting the immune system, helps maintain healthy nerve and brain function, assists in nerve communication, and is an essential cofactor in the production of serotonin and dopamine.

Magnesium: Magnesium is a safe and natural mineral which helps alleviate muscle contractions, as well as minimizes jaw clenching and soreness.  Aside from it muscle relaxing benefits, magnesium is required for over 300 biochemical reactions in the body. Some of the many health benefits of magnesium include transmission of nerve impulses, detoxification, body temperature regulation, and energy production.

Antioxidants help the body fight against free-radicals, harmful unstable molecules responsible for the neurotoxic damage which can occur after MDMA use. Antioxidants help prevent damage to the body by neutralizing free radicals, and protect against the negative effects they can have on the brain.

Electrolytes are what your cells use to maintain voltages across their cell membranes, and carry electrical impulses across to other cells. Hence, electrolytes are extremely important in regulating nerve and muscle function, body’s hydration, blood pH, blood pressure, and the rebuilding of damaged tissues.  Electrolyte imbalance can occur from many things. For example, when a person dances all day at a festival they lose electrolytes in their sweat, particularly potassium and sodium. Also, when a person drinks alcohol they become dehydrated and lose a lot of essential electrolytes through their urine.  An imbalanced level of vital electrolytes can lead to headaches, weak muscles, muscle contractions, cramps, or even severe cardiac conditions and heart palpitations.  The electrolyte complex in our formula helps replenish lost electrolytes to maintain healthy, stable electrical impulses within the body.