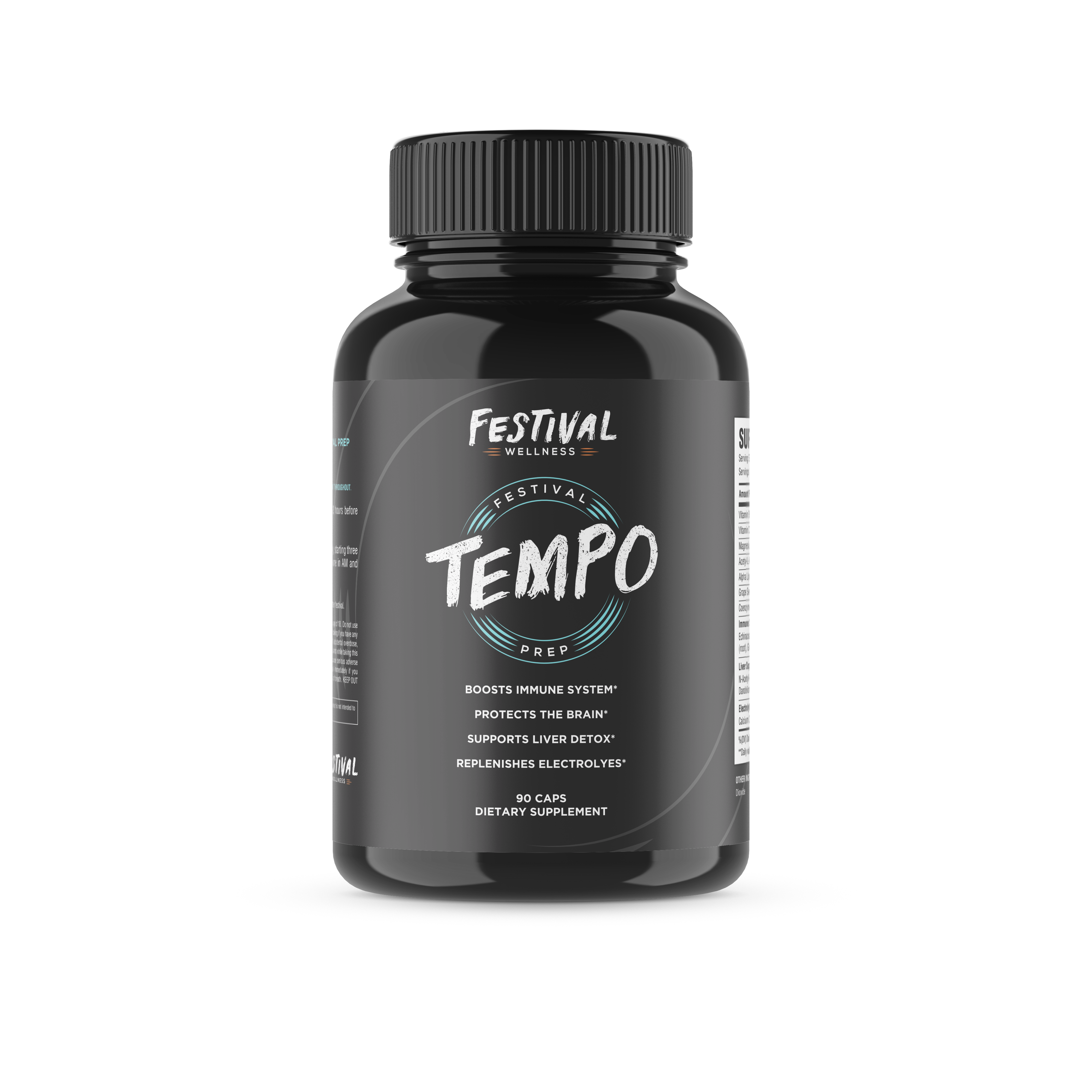 TEMPO: FESTIVAL PREP is a custom vitamin, herbal, and mineral supplement formulated by doctors and specialists in natural medicine who are also festival enthusiasts. This supplement is made to help protect the body and brain from the stress induced by partying for multiple days at festivals.

BOOSTS IMMUNE SYSTEM. Our custom herbal & mineral blend helps to promote healthy immune function and prevent one from catching a cold while at a festival or event.

PROTECTS THE BRAIN. Our super-antioxidant blend is formulated to help protect the body and brain from free radicals created by substance and alcohol induced toxins while partying at festivals, parties and raves.

SUPPORTS LIVER DETOX. Our custom blend of amino acids and herbs help to support the liver in its function of breaking down harmful toxins created by substances and alcohol while at festivals. This in turn helps prevent hangovers which are caused by a build up of toxins.

REPLENISHES ELECTROLYTES. Our blend of minerals help to replenish electrolytes which are necessary for recovery and prevention of hangovers. These essential electrolytes help regulate nerve and muscle function, body’s hydration, blood pH, blood pressure, and the rebuilding of damaged tissues

Vitamin B6: Vitamin B6 is an extremely versatile vitamin naturally present in many foods. B6 aids in supporting the immune system, helps maintain healthy nerve and brain function, assists in nerve communication, and is essential in making the hormones serotonin and norepinephrine. 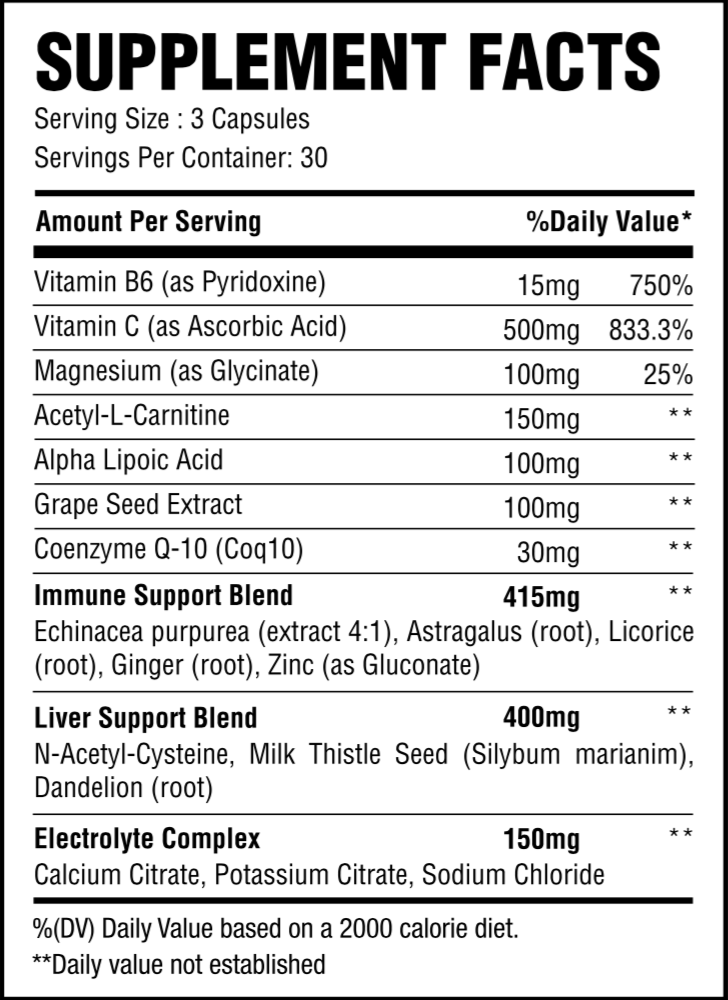 Vitamin C: Vitamin C is an important antioxidant that boosts the immune system by stimulating both the production and function of white blood cells. If your immune system is overwhelmed by free radicals (like the kind alcohol and many substances create) it won’t have a chance to fight off invading bacteria and viruses. Naturally found in many foods, Vitamin C has been shown to help fight off free radicals, as well as promote serotonin recovery.

Magnesium: Did you know up to 80% of Americans do not get enough magnesium in their diet and may be deficient? Magnesium is an essential mineral for maintaining health, and is required for over 300 biochemical reactions in the body. Some of the many health benefits of magnesium include transmission of nerve impulses, detoxification, body temperature regulation, and energy production.  Magnesium is a safe and natural mineral which helps alleviate muscle contractions, as well as minimizes jaw clenching and soreness. Magnesium glycinate is the most bioavailable form of magnesium.

Acetyl L-Carnitine: L-carnitine acts as a preventative to brain damage and deterioration due to stress. L-carnitine also hinders distress that can occur to nerve cells when there is a lack of oxygen to the brain. This naturally occurring amino acid can act as an antioxidant that provides the brain with protective and healing energy. By providing your brain cells with needed energy, they have the ability to develop to their maximum capacity. Dead brain cells are nearly impossible to replace so it’s important to maintain their strength and vitality. Additionally, L-carnitine has four remarkable benefits for your brain and entire nervous system, including; keeping neurons healthy and energetic, repairing and protecting membrane signal receptors, protecting neurons from the damage of stress, and helping to promote memory function.

Alpha-lipoic Acid (ALA): Alpha-lipoic acid, or ALA, is an antioxidant that is both water and fat soluble. Known as the “universal antioxidant”, ALA is able to function in both fatty and aqueous states.  Antioxidants help the body fight against free-radicals, harmful unstable molecules responsible for aging, tissue damage, and disease. When one is intoxicated in any way, harmful free radicals are created in the body. ALA prevents damage to the body by neutralizing these free radicals, and protects against the destructive effects they can cause the body.   ALA also has the amazing ability to recycle antioxidants. Usually, after an antioxidant does its job of protecting your body against free radicals, it cannot be used again. However, this ability can be restored and ALA aids in the regeneration of these antioxidants so they are able to continue to combat more dangerous free-radicals.  In addition to their protective properties, ALA also helps repair any molecules previously damaged by free-radicals.

Coenzyme Q10: This fat-soluble, vitamin-like coenzyme functions in every cell in the body to generate energy. Located in the mitochondria, or the “powerhouse” of the cell, Coenzyme Q10 (also known as CoQ10) is used to generate energy in the form of ATP.  Remember ATP from high school biology?

Immune Support Blend: Using traditional herbal medicine, we’ve formulated a custom blend for strengthening the body’s resistance to illness by boosting immune system components. This is super important at festivals when your immune system is easily compromised from inhaling dust, out in the sun all day, up dancing all night, and around thousands of people.

Echinacea Purpurea: Echinacea is one of the most popular herbs in America. It grows abundantly in the Pacficic Northwest, and its flowers have important immune boosting properties. Echinacea has been used to help shorten the duration of the common cold and flu, and reduce symptoms such as sore throat, cough, and fever. It commonly used to boost the immune system and help the body fight infections. Studies suggest that white blood cells and spleen cells, whose primary function is to fight infection,  increase in number when Echinacea is taken.

Astragalus Root: Astragalus root is a powerful antiviral and adaptogenic herb that has been used in traditional Chinese medicine for centuries, and its main function is to boost the body’s immune system. Scientific studies have shown that astragalus has antiviral properties and stimulates the immune system, suggesting that it may help prevent the common cold or flu.

Licorice Root: Licorice is said to be one of the most extensively researched medicinal plants, and it has a lengthy list of versatile uses to match. Used in both Western and Chinese herbalism, this magical herb is a remedy for cold and cough, helps support digestion, eases acid reflux, soothes a sore throat, acts as an anti-inflammatory, and provides immune system support.  Additionally, in Chinese herbalism it is said that licorice helps to harmonize other herbs and can be used as an antidote for a variety of toxic substances.

Ginger Root: Ginger has several antibacterial properties and has been found in scientific research to help enhance the protective functions of the immune system. Ayurvedic medicine has praised ginger’s ability to boost the immune system for centuries and credits gingers warming effect as what helps break down the accumulation of toxins. Aside from being an incredible immune booster, this versatile herb is also great at alleviating nausea and upset stomach.

Zinc: Zinc is an essential trace mineral that plays a vital role in the human body and helps keep the immune system strong. Studies have found that zinc helps fight infection and can reduce the duration of a cold by as much as 50%.

Liver Support Blend: The liver constantly works hard to help defend us from toxins, acting like a filter and removing harmful substances from the body. This custom blend is designed to help your liver protect you against toxicity and avoid a nasty hangover.

N-Acetyl-Cysteine: NAC is a protein with years of scientific research to back up its clinical effectiveness. NAC is the precursor of glutathione and its powerful health benefits arise from its ability to restore intracellular levels of glutathione. Glutathione is a very important compound because it’s your body’s own powerful antioxidant and detoxifier. It plays an extremely important role in the liver since it helps your body break down toxins. This can be extremely beneficial if you are drinking and can help diminish a hangover. Ultimately, glutathione helps your liver protect you against toxicity.

Milk Thistle Seed: Milk thistle is an herb native to the Mediterranean and has been used for over 2,000 years. While it has many different benefits, milk thistle is  well-known for supporting the liver in its role as our bodies detoxifier. Milk thistle has been shown to decrease, and even reverse, damage to the liver. It helps rebuild liver cells while removing toxins from the body. Milk thistle is especially effective at naturally reversing the harmful effects of alcohol consumption.

Dandelion Root: Dandelions, which grow like weeds in most parts of North America are great in helping protect and cleanse the liver. The vitamins and nutrients present in dandelions help cleanse our livers and keep them working properly. Dandelions contain vast amounts of potassium that restore the mineral balance in the kidneys as toxins are flushed out. The high amount of vitamins, calcium, potassium and other trace minerals in Dandelion’s root help keep the body in balance. Dandelions also have highly volatile and bitter constituents in the root which work in isolating toxins in the body and flushing them out.

Electrolyte Complex: Electrolytes are what your cells use to maintain voltages across their cell membranes, and carry electrical impulses across to other cells. Hence, electrolytes are extremely important in regulating nerve and muscle function, body’s hydration, blood pH, blood pressure, and the rebuilding of damaged tissues.  Electrolyte imbalance can occur from many things. For example, when a person dances all day at a festival they lose electrolytes in their sweat, particularly potassium and sodium. Also, when a person drinks alcohol they become dehydrated and lose a lot of essential electrolytes through their urine.  An imbalanced level of vital electrolytes can lead to headaches, weak muscles, muscle contractions, cramps, or even severe cardiac conditions and heart palpitations.  The electrolyte complex in our formula helps replenish lost electrolytes to maintain healthy, stable electrical impulses within the body.